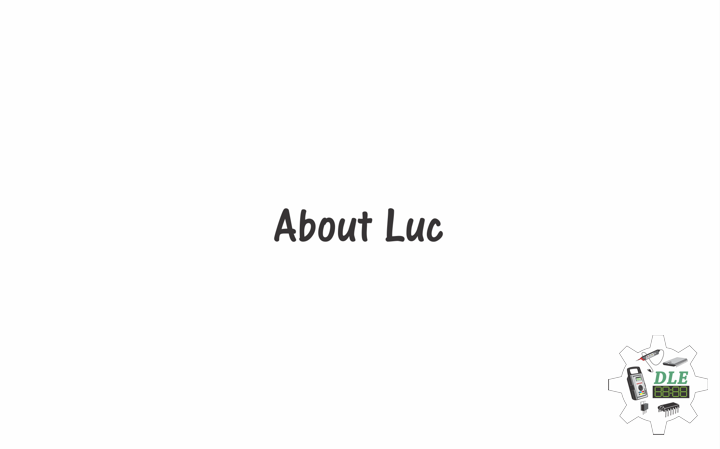 Luc was born as the only child of a middle-class family of French descent in a small village famous for its ski resort north of Montréal, Québec, Canada. An avid reader from before the time he started formally in school, he has had a lifelong interest in learning. He has always said;

“If you go to bed at night without learning something new that day, your day is not complete.”

The quintessential “Renaissance Man”, Luc has always had deep passions for a wide variety of interest for as long as he can remember. He is self-learned on a wide variety of topics, and has developed a series of learning and creative techniques to assist him.

His early formative years were spent reading at least 6 books a week throughout the year. His summers, while he was not reading, were mostly spent in the cold waters of a crystal-clear lake at his grandparent’s cottage deep in the Laurentian Mountains where he was born.

During that period his family was living in a suburb of Montréal, and was commuting 160 Km (~100 Mile) every weekend to his grandparent’s place in the north. A gipsy at heart from those days on, Luc has lived, worked, and traveled all over the world. He is a native English and French speaker and has learned Spanish over the last 9 years living in Mexico.

Luc started skiing at the age of 3, as everybody from his village was “born with skis on their feet”, as they said locally. He was an avid skier, swimmer and cyclist until he destroyed one of his knees on the day of the 25th wedding anniversary of his parents in a stupid accident that happened while putting on the snow tires on his car.

Luc was training in archery for the provincial Elite team but a shoulder injury just a few months before the 1976 Olympics prevented him from going further on this path. During that time he also became a certified archery instructor. He later participated in a variety of other shooting sports, but decided to only compete for fun because of the high level of politics involved in any organized sport. He did coach members of various shooting teams as his love for teaching and the sport was too great to entirely abandon it.

During his youth Luc worked as a shop assistant, a metal worker, an assistant machinist, a draftsman, a biologist, and a blaster in a mine in the arctic. He finally graduated with a B.Sc in science, and then a D.D.S. from McGill University, Montréal, Québec, Canada.

He then moved away from his native Québec, and worked in private dental practice from 1983 to 1989 in the north of Ontario, then returned to Québec and continued practicing part-time until 1992.

In 1989 he took a short sabbatical to write a science-fiction fantasy novel. The idea had been in his mind for a long time, but his hectic lifestyle never gave him the time to actually sit down and write it. In his youth Luc had developed his own techniques of directed dreaming and since then has always used it in all of his endeavors. He applied these techniques to write the entire book.

Through the 80’s and 90’s another great interest in his life, gourmet cooking and wines was developed. He has a lifelong interest in cooking that he developed since early childhood at the side of his mother and grandmother, who were consummate cooks. He was involved in the professional side of the wine and food business both as a consultant and a buyer for a variety of private concerns during that period. It permitted him to travel the world extensively and in the late 1980’s he was all packed up to go manage a huge vineyard in Montenegro, then part of the old Yugoslavia, when the war broke up in that part of the world. Luckily this happened before he had moved over there.

Another great passion of Luc is his love for anything having to do with technology and computers. At an early age, in the days he was spending his summers at the lake, he used to take apart everything mechanical around the cottage and actually put it back together in a working and improved condition. When electricity finally arrived with the new road deep in the woods, he started taking apart old radios and built himself a simple sound system from an old donated stereo turntable he mounted in a frame made of a few planks of wood, and the cassette recorder he had received that year as a Christmas gift. It was the start of an interest in technology that lasted until today. Those early experiences also lead him to build fine wood furniture and to become a licensed gunsmith and a metalsmith during the years he was living in Northern Ontario. He is currently applying this knowledge by starting to build electric guitars as a hobby.

Disenchanted with the then current business management systems, which forced you to change the way you ran your business to match the way the software worked, Luc started his IT consulting practice in 1983. One of his goals was to write flexible software systems that adapted themselves to the way your business worked, not the other way around. His Kameleon / JLPSoft line of software is the culmination of that work.

He then founded JLP Consultants in 1983, to service large corporate clients such as KPMG Peat Marwick, Fannie Mae (Federal National Mortgage Association), Chase Manhattan Bank foreign trade division (Hong Kong), and Warner Lambert with IT consulting, multimedia and software programming services. He has been a self-employed consultant since 1983.

Being an avid photographer and highly interested in the creative arts, Luc in the early years of his consultancy, also offered graphic design, 3D animation, and multimedia creation services as the technology at the time was in its infancy and still very complex. Most businesses could not afford having both the expensive equipment and the qualified personal to operate it on their staff so Luc offered those services to fill this gap. Now he mainly uses his creative talents for relaxation, and occasionally for some interesting project from one of his customer.

Having being self-employed all of his adult life, Luc has also been involved in a variety of successful technology startups, and mentored many who wished to start their own businesses or to find new markets for their existing products. He always applied his basic principles that he uses for both life and business that one must always have a dream and use his intuition and determination to make it come true. He now also consults in various aspects of business, offers business facilitation services, and gives motivational and business conferences.

With wide-ranging interests in technology, business management, and the food-wine industry he offers a very different and innovative approach to the traditional consulting practice. He dedicates his work time on his consulting practice, works daily on his line of software products, and give conferences, workshops and classes on a variety of subjects.

In his spare he still writes extensively, enjoy cooking special meals for family and friends, and recently started teaching himself to play the guitar, something that had been on his extensive list of things to do in this lifetime, and that he never had the time to dedicate himself to do.

Luc was too busy to share his hectic lifestyle with anyone else until one day in the spring of 1998 he met his soulmate on the Internet. He finally settled down and married the love of his life in sunny Cocoyoc, Mexico in the fall of 2000.

After extensive traveling and working all over the world, in the spring of 2003 Luc moved from Canada to Mexico with his Mexican wife and business partner Normita and they are lived near Mexico City during 9 years where run their worldwide business interests.