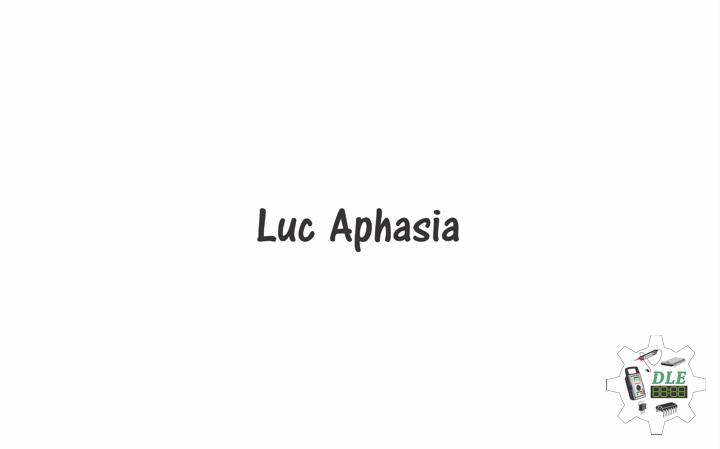 Aphasia (from Greek a- (“without”) + phásis (“speech”)) is the name given to a collection of language disorders caused by damage to the brain. The word aphasia comes from the word aphasia, in Ancient Greek, which means “speechlessness”, derived from aphatos, “speechless” from a-, “not, un” and phemi, “I speak”. A requirement for a diagnosis of aphasia is that, prior to the illness or injury, the person’s language skills were normal. The difficulties of people with aphasia can range from occasional trouble finding words to losing the ability to speak, read, or write, but does not affect intelligence. This also affects visual language such as sign language. The term “aphasia” implies a problem with one or more functions that are essential and specific to language function.

Aphasia is a communication impairment that affects all aspects of language, including speaking, understanding speech, reading, and writing. You would have difficulty saying what you mean, understanding what others were saying to you, reading the language, and writing things down. This provides a little insight into what it might be like to have aphasia.

Aphasia is caused by a brain injury, typically due to stroke, traumatic brain injury, or some other illness. Depending on the exact location of the brain injury, aphasia can manifest itself in many different ways. Some people with aphasia have more difficulty understanding what is said to them and reading than they do speaking. Other people with aphasia have more difficulty saying what they want to say but understand much of what is said to them. Sometimes aphasia is more severe and affects understanding, speaking, reading and writing quite broadly.

Aphasia is usually caused by a stroke or brain injury with damage to one or more parts of the brain that deal with language. According to the National Aphasia Association, about 25% to 40% of people who survive a stroke get aphasia.

On December of 2012, Luc decided to move to California where he had some business to attend, unfortunately 7 months after the arrival, on September 25th of 2013, Luc (me) suffered a massive stroke that let him with an aphasia condition; in a way it was good to be here because I received the best medical attention I could ever have. I had a long way to recover but I managed to improve a lot. I just have an aphasia condition that does not allow me to speak, I can speak words and make myself understand by using the computer, and the good thing is that I did not lose my abilities. It is a huge pain. Although Luc has this problem he has been working with various electronic projects since then.